During a press conference on Tuesday, Dekalb County and Atlanta United FC officially announced that the team's training facility will be constructed in that area. A 3,500 seat stadium will be built along with three practice fields and a headquarters for the team.

In addition to being the home of Atlanta United's future academy and first team training sessions, Club President Darren Eales announced that the main stadium will also be used for early round U.S. Open Cup matches.

The team is also mulling the possibility of creating a reserve team to compete in USL. If they do, it's likely such a team would also play their matches in this stadium.

Some early renderings of the future facility have been released to the public and look quite lovely. 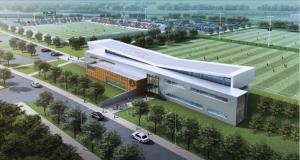 Eales mentioned that he hopes to give the public access to all training sessions on the fields. This includes first team and academy training.

The training fields and the stadium, just like the New Atlanta Stadium, will consist of artificial turf.

The team headquarters will be one massive building that will house the entire academy and the first team. Every level of the club will be together in cohesion under one roof. For the young players it will give them a chance to see how a real professional first team operates and give them something to aspire to.