This Academy Alumni Update is previewing the upcoming NCAA Tournament. This will all end up in Cary, North Carolina at the home of the former Carolina Railhawks. Check out the bracket, below: 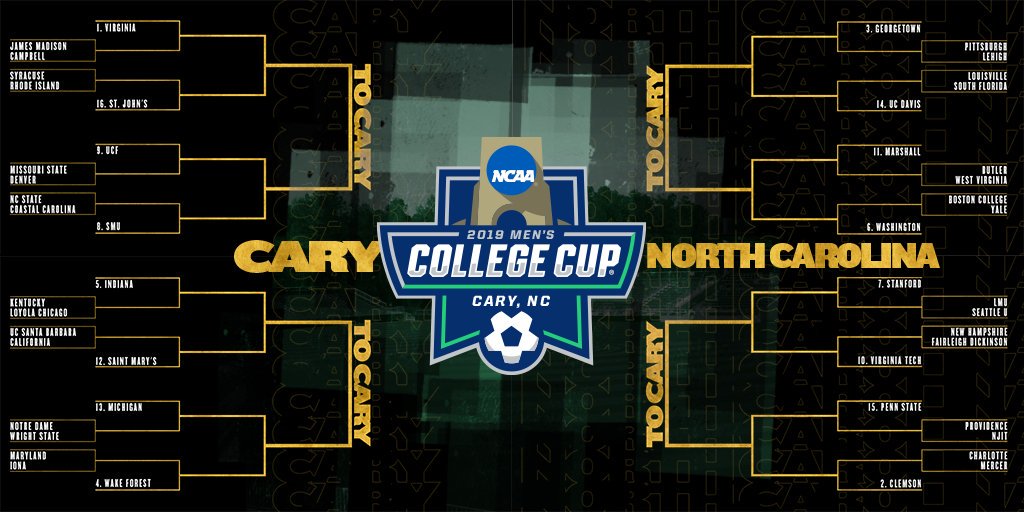 Atlanta United will be represented in this tournament by several years of academy graduates with the eldest currently playing their Junior seasons.

Working our way from the left side to the right side of the bracket, let's see who is playing.

In the first round, Kendall Edwards (D) and NC State will be taking on Coastal Carolina for the right to play Southern Methodist. Edwards was slowly introduced to the Wolfpack defensive rotation throughout the season and came on strong as a nearly full-time starter. He will likely start for NC State in this tournament and potentially next season unless AU2 comes calling with a professional contract for the freshman.

Jack-of-all-defensive-trades John Michael Bandy and the Kentucky Wildcats will match up against Loyola Chicago before having to go through the buzzsaw that is Indiana. Bandy has played everywhere for Kentucky over his time with the team. His versatility will only make him more valuable as a potential depth signing for AU or a USL team if he isn't drafted in 2 years.

Russell Shealy and the Maryland Terps will take on Iona for the right to challenge the AU-heavy Wake Forest Demon Deacons. Maryland are attempting to have another deep run in the tournament after a successful 2018 run with Dayne St. Clair between the posts. Shealy hopes to lead his team past former academy teammates Machop Chol, Omar Hernandez, and Takuma Suzuki for Wake Forest in order to get back to the finals.

In the first year of his transfer season, Junior defender Bryce Washington hopes he can help Pittsburgh past Lehigh and Georgetown in a Cinderella run. This Pittsburgh team caught the ACC off-guard with a longer-than-expected run in the ACC tournament and they hope they can keep that magic going. After an All-Big 10 Freshman season at Rutgers, Washington did not have the same success his sophomore campaign so he found a change of scenery and a new coaching philosophy that has allowed for a much more successful Junior campaign. He has been instrumental in this remarkable run by the Panthers so we wish him the best of luck.

Concorde Fire and AU goalkeeper Berk Watson will travel with the University of South Florida Bulls to face Louisville, but he is unlikely to play considering he has not yet featured in his two years with the school. Hopefully he finds his way through a crowded goalkeeping depth chart next season.

Freshman defender Thomas Toney will hope to provide valuable substitute minutes for Yale against Boston College. Toney has featured in every match for Yale but often in brief cameos of less than 20 minutes. He will likely take on a larger role in his sophomore season.

Freshman phenom Liam Butts and the Penn State Nittany Lions will take on the winner of Providence (Julian Gressel's alma mater) and NJIT. Butts has come on strong as more chances have found the back of the net at the end of his first season, scoring 9 total goals so far. He has started the majority of the matches this season and will likely remain a vital piece of this team's future unless he receives a compelling professional offer.

The AU-heavy Mercer Bears take on Charlotte for the right to play Charlie Asensio and ACC All-Tournament attacker James Brighton with the Clemson Tigers. Dylan Gaither has played a larger part in getting Mercer to the tournament so this freshman will likely be relied upon once again to help push this team forward in the tournament. Also featuring for the Bears will be Ousman Jabang, Dawson Gideon, Kareve Richard, Mike Ille, and Brant Zulauf. Mike Ille transferred from Clemson to Mercer last season so this could be a compelling match-up if Mercer makes it to the second round to face his former squad.

And that rounds out our first two rounds of the NCAA tournament. Matches start on the 21st and should make for some fun soccer as far as college soccer goes. Give our lads a shout and wish them success in their continued development.