We live in an age where aspects of our lives are determined in nanoseconds by algorithms and machines we don't control. A traffic light turns yellow, causing an irresistible adrenaline spike which leads you to either test the bounds of your Corolla's engine, or slam your foot on the break and watch things and small animals fly past you to the front of the car. All to comply with a machine that has decided it makes sense to make you wait. Nobody likes waiting. But until someone makes teleportation physically and commercially viable, the machine doesn't care, and you have to wait.

You know what we DON'T have to wait for? Our dearly beloved Atlanta United's next season. After all, we live in the age of AI, neural networks, analytics, and unhealthy amounts of videogames cutting edge sports simulation software available through the magic of the internet right on our computers. Why should we wait when we can experience it NOW?

This off season, I decided to bite off a massive project to build alongside last semester's data science and statistic courses. I used K-Nearest Neighbors clustering to determine what team have similar play styles, scoring distributions among players, and which types of teams have done better against each other over the least year or so in MLS. I planned a model to determine what kinds of player stats in each positions heavily influence the overall stats and success of different types of teams, and how to predict the impact of signings across the league on the playing field before any of them ever came to the states.

And then... I stopped working on it. I still have an outline of the plan, but school caught up, I got bored, I started running into problems etc. etc. etc. so no, the future is not now, the future is still tomorrow or later at a to-be-determined date. Probably never.

But luckily for anyone who WAS excited about the prospect of a model with high probable inaccuracy, I came up with an even better idea! I decided to sim Atlanta United's 2022 season with the current roster and see what happened; while sharing the journey with my fellow content-hungry fans who can't wait for the new season.

So I'll jump right into it! Here's our starting 11: 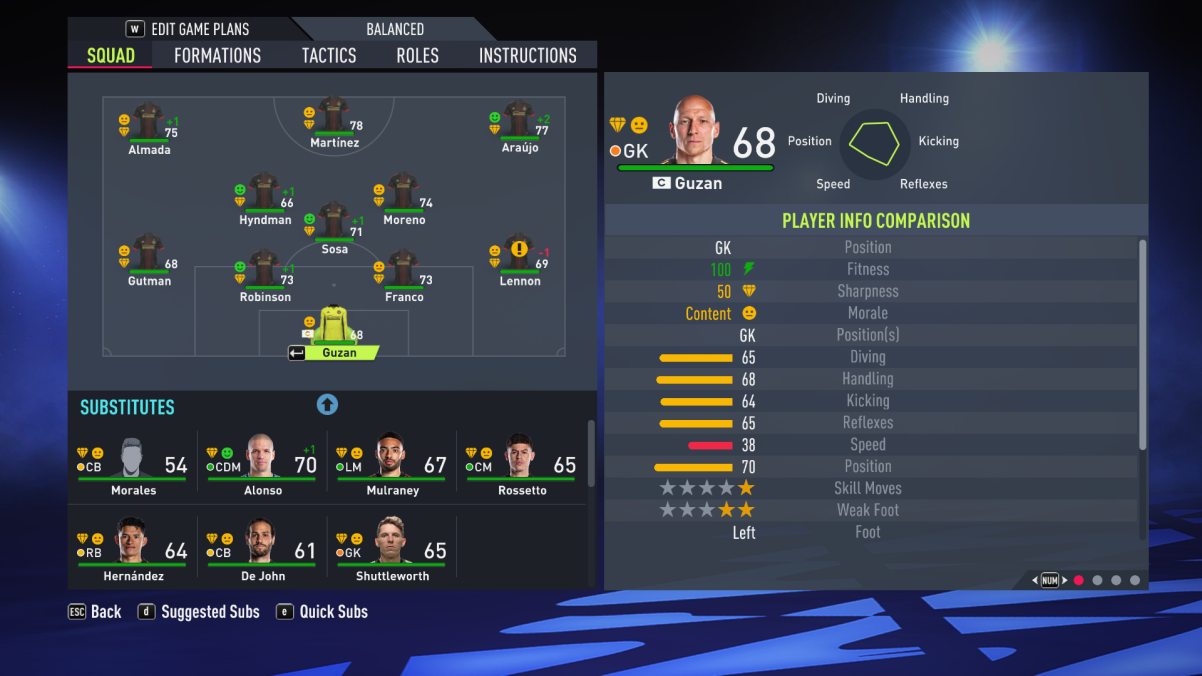 I immediately simmed the preseason. So we started off in a preseason tournament and do pretty well, we survived the group stage only to be eliminated in the first elimination round. Let's take a look at our first goal scorers.

Almada had a great debut despite staying off the scoresheet, and we scored two goals from Moreno and... Chol? Uh. Ok. Wait why is Josef not anywhere to be found. Is he injured? Is he benched? Is he... no... 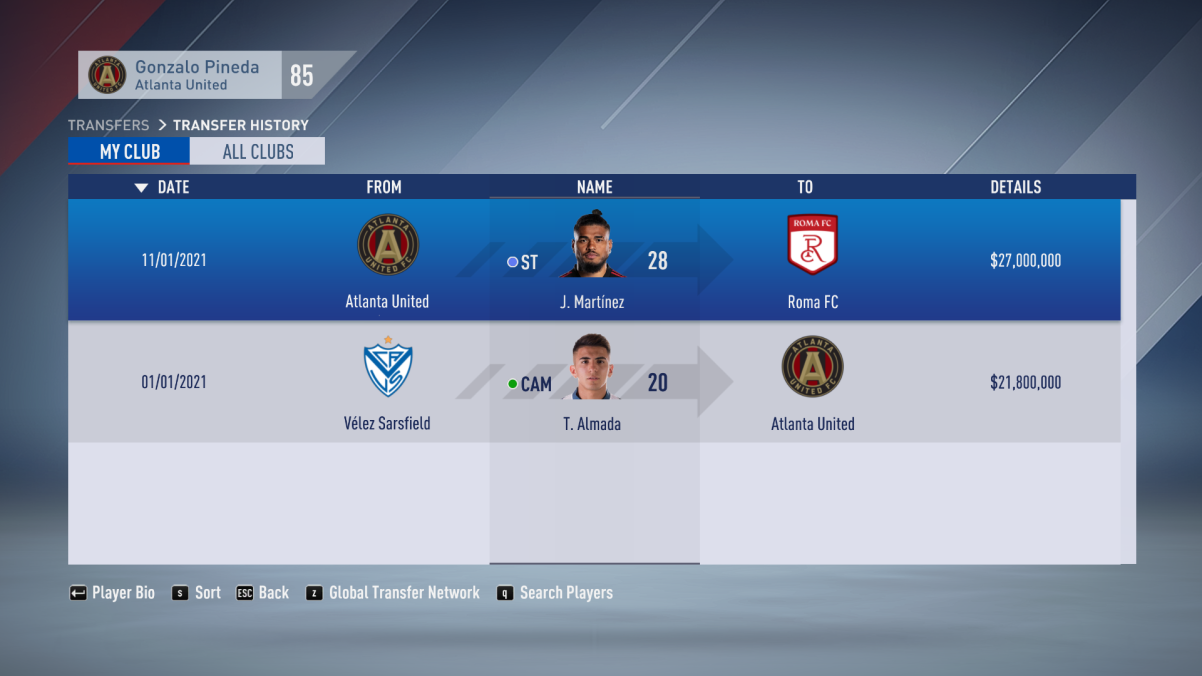 So the AI sold Josef before the season even started, didn't so much as buy a backup striker, and has Chol starting every game up top.

It's fine. (*narrator's voice*: it was not fine, this was a horrible sign of things to come, and he should have restarted now while he had the chance) I'll just continue and see how it goes. It's basically like when he hurt his knee and we lost him for the whole season with no backup. Onwards!

The regular season started pretty well, with Atlanta going undefeated for around 5 games, before taking our first loss at the feet of Nashville. I stopped the sim and looked to see what was happening stat-wise. Wait, why does the starting 11 look like the 2s all of a sudden, and where are my players? Oh, right. 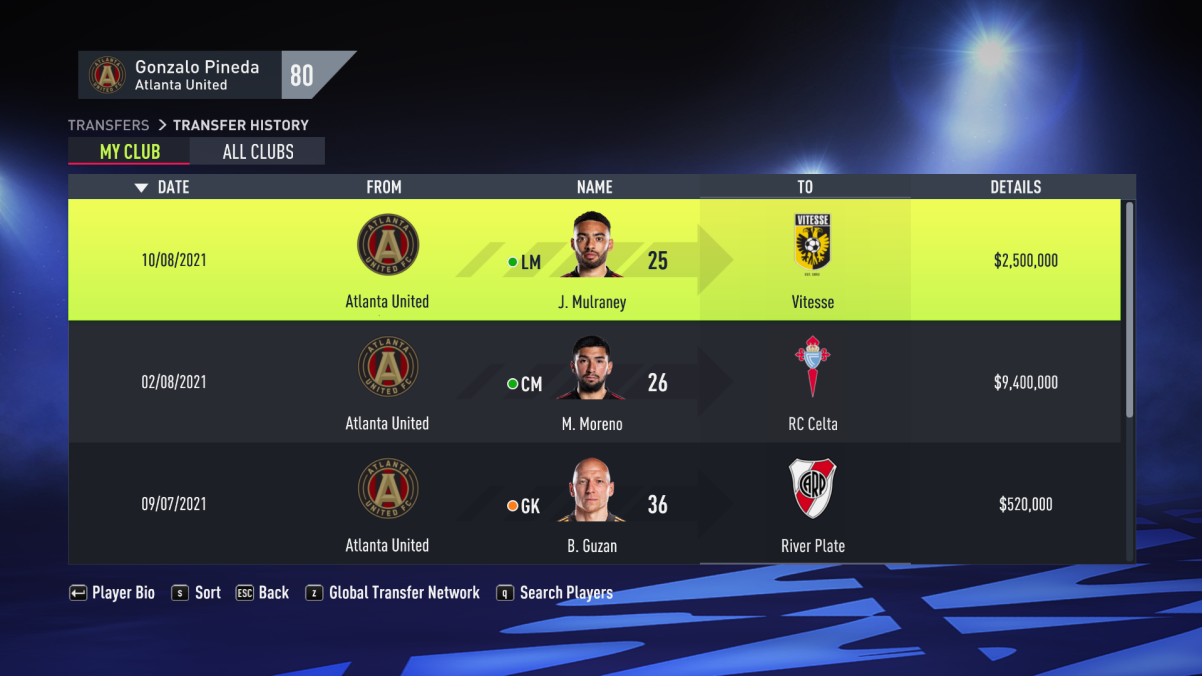 So now that River Plate looks more like Atlanta United than with Barco, LGP, and Guzan than actually Atlanta does, we now have no starting keeper, we're out a starting midfielder and backup winger, and we don't have a striker either. Ok well this is just a train wreck. I'm surprised there isn't angry mail from fans in the manager inbox saying #BocaOut, #EalesShmealsWeNeedBetterDeals, and so on.

Ok so I went out and bought J Klinnsman (unfortunately not Jurgen Klinnsman but the next best thing) to be our GK, and Arango from LAFC to attempt to replace Josef since I couldn't buy him back even with our entire transfer budget. I knew in my heart of hearts already though: science had failed me. I went on to simulate through the rest of the USOC, which somehow we completed all the way to the final before losing to Orlando (the most impossible thing of all). The team was on a losing streak, and I just hit "quick sim" all the way through the end of the season. We squeaked into the playoffs by finishing 7th in the East and lost first round to Columbus.

Clearly, this run was a bust. Maybe I'll try another run through tomorrow and try to prevent the AI from going all player-liquidation mode on me, but I'm not so sure I have enough faith left in FIFA to try that. Clearly this isn't our future, clearly we'll win a treble this year if not the club world cup, but until the season starts, I guess we'll have to just wait to see.